This research project brings together social scientists, architects, and urban designers to mutually investigate current social and spatial conditions in Tokyo. Professionals from different fields will contribute their individual perspectives and will stimulate one another’s work through an intellectual and analytical exchange. The convergence of disciplines is aimed to produce a unique body of knowledge of social dynamics in the complex and diverse spatial condition of Tokyo. The purpose of this project is to provide opportunities to deepen participants’ understanding of fundamental issues in the study of Japan through substantive discussion and exchange of views from an interdisciplinary perspective, and to disseminate the conclusions in a volume of essays and an exhibition. 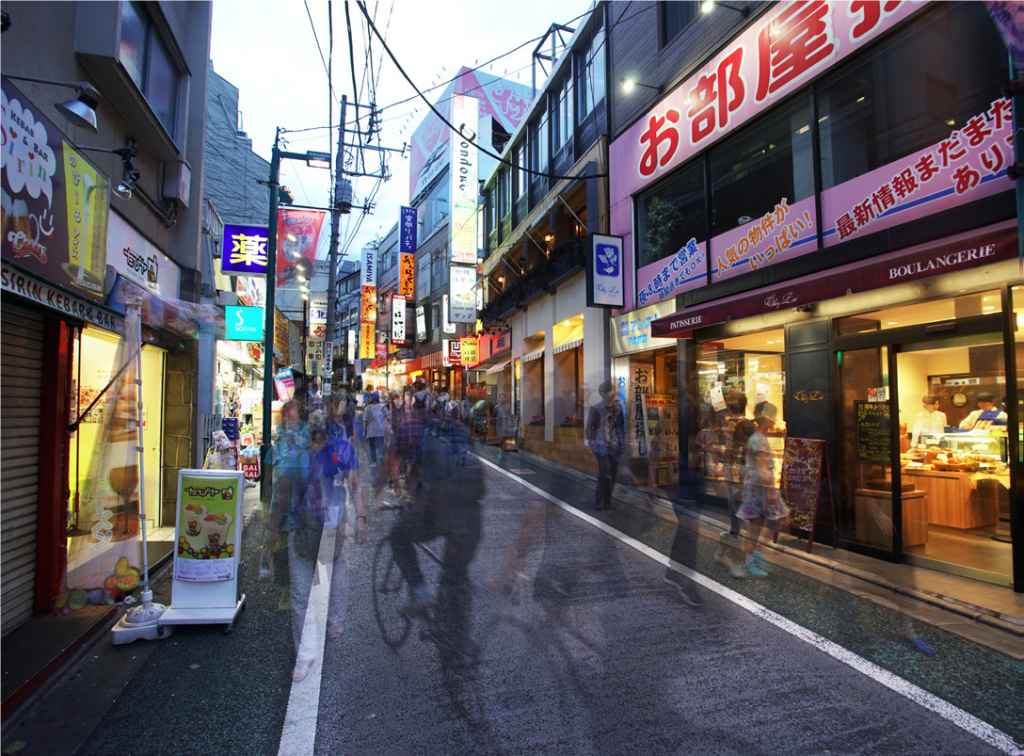 Tokyo is known as a polycentric city, consisting of multiple individual clusters of activity and density. Each of those clusters forms a neighborhood, an autonomous micro-cosmos with a unique socio spatial identity. This study examines three such neighborhoods in Tokyo which exemplify a live-work-play balance that appears to be desirable to many of the city’s residents and visitors: Koenji, Shimokitazawa and Yanesen. These neighborhoods are undergoing transformative processes which allow them to evolve, while maintaining their a multi-generational, community-based orientation. This study aims to identify these processes and their spatial manifestation. By analyzing these neighborhoods individually, and comparing them to one another, this study attempts to identify prototypical relationships and hierarchies between local formal and non-formal components which form the living conditions of these urban environments.

A study of urban patterns and building typologies in Tokyo’s urban fringe or hinterland. The latter term names the large suburban realm, located outside the core urban fabric of the city. By city one means both Tokyo, Kawasaki, Yokohama and Chiba which constitute the main cities within the Tokyo metropolitan area or Shuto ken. This hinterland or fringe is delineated by a certain similarity of urban forms, density, zoning, land cost, etc. With the heavy demographic and economic evolutions of present Japan, this large area enhances the most dramatic changes that are occurring in term of shrinkage and urban expansion. Such a study shows a comprehensive view of the future change of the urban metropolis.

This research is part of my ongoing project of mapping and investigation of local urban narratives in residential neighborhoods which I am intimately acquainted. Using my Sketch and Script method of combined recording, annotation, analysis and reflection, I focus at residential parts of Tokyo where I live and, by creating visual and textual documentation which does not shy away from expression of my subjectivity, open those spaces, as lived entities, to discussion. My focus on urban ordinaries of Tokyo starts from on my own everyday life and lived experiences, from my innermost “self”, and expands towards my home, street and broader spaces of the neighborhood. The production of textual and visual documentations will be displayed to engage with residents and public to create discussion, introspection and comments.

Subcultures are common in Tokyo, each having its own space across the city. Kaichiro will study how

various sub cultures co-exist in Tokyo, how they shape their spatial environment, and in turn are

This project explores places and practices of everyday life in several residential precincts of Tokyo. The focus is on quality of life within traditional, low-rise high-density urban fabric, and within the increasingly present high-rise high-density precincts. Those two distinct spatial projections of society represent profoundly contradictory sets of values and development paradigms. While the former remains within an established, authentic urbanity which stimulates Lefebvrian “plurality, coexistence and simultaneity in the urban of patterns, ways of living urban life”, the latter is an imported paradigm of inauthenticity, embraced by global (including Japanese) financial and political elites. The push towards the Olympic Games 2020 stimulates insatiable appetites for profit, with no care for the day after.

Using Shibuya station as a case study, Mark will investigate how resident/stakeholder participation

is shaping the city environment. He will attempt to identify what outcomes in the final design result

were a result of public participation, what would have been the alternative, and how common is

public participation in design in Tokyo.

This sociological urban study is part of a continuous research. It includes the examination of social

dynamics between individuals and groups in the context of the spaces they occupy.